’Tis the Season of Inflationary Pressure

The prime minister last night provided an update to the nation on the rollout of the booster campaign to combat the COVID-19 Omicron variant. There were 1,239 reported cases of the variant in the UK yesterday, double the number for the previous day, which has prompted the government to move to Plan B.

Beyond public health concerns, Omicron is likely to have an economic impact as the effects of the new variant are felt around the world. The Monetary Policy Committee left the base rate unchanged in November and UK markets have now adjusted expectations to a 33% chance of a base-rate hike in December. Investors are also pricing in downside risk to the Bank of England’s (BoE’s) already underwhelming Q4 forecast of 1%. Disappointing growth figures run in parallel to high and rising inflation in the economy; this now stands at 4.2%, more than double the BoE’s target of 2%, and markets believe it has the potential to rise as high as 4.8%. This may sharpen minds on Threadneedle Street later this week.

In the US, where the Federal Reserve has abandoned its use of the term ‘transitory’ to describe post-pandemic inflation, the economy appears to be in more robust health; expectations of a strong labour market and GDP growth for the final quarter of 2021 combine to suggest policy makers may move to raise rates in early 2022. 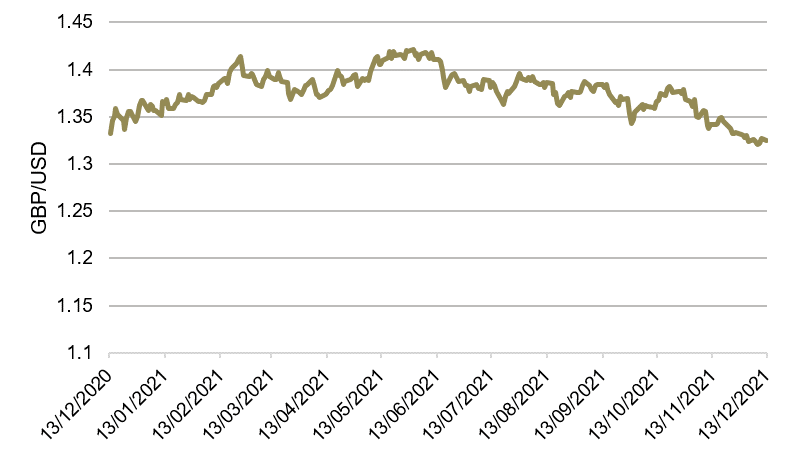 The US president held a virtual meeting last week with Russian president Vladimir Putin to discuss the deteriorating situation in the Ukraine. Any conflict in the region could be hugely damaging to European stability and represents one of the toughest foreign-policy tests of Mr Biden’s presidency. Despite these potentially seismic shifts, performance against the dollar was relatively unaffected. The pound rose 0.15% across the week from 1.3240 to close at 1.3260, while the euro closed down 0.062% at 1.1311.

The European Central Bank (ECB), in contrast to the Fed and BoE, has signalled that it will continue its asset purchase program, which has been running at an average €70bn per month during the pandemic. As a result, markets do not expect any rate rises on the Continent until later in 2022. The bloc is not, however, immune from inflationary pressure: figures for November show the Consumer Price Index (CPI) rising to 4.9%, the highest since the inception of the euro.

The week ahead is busy with data releases which are likely to take on renewed importance in light of rising Omicron cases. The BoE will report later today on financial stability before UK markets are treated to labour, inflation, and consumer-confidence figures on consecutive days. The Fed is due to release the Open Markets Committee policy on Wednesday before a raft of ECB policy, including inflation policy, is published at the end of the week. There will certainly be no shortage of data for investors to mull over as the world looks to avoid another winter of discontent.