On Hold, For Now

Markets had fully priced in an announcement of a 0.15% interest-rate hike at last Thursday’s meeting of the Monetary Policy Committee (MPC): this would have seen the UK base rate climb back to 0.25%. Economists, on the other hand, were evenly split on the chances of a hike. In the end, those expecting the Bank of England (BoE) to hold rates at the historic low of 0.10% were proved correct.

Bank governor Andrew Bailey joined the 7-2 majority to hold rates, while Michael Saunders and Sir Dave Ramsden voted for the much-anticipated hike. Mr Bailey described the decision as “finely balanced” and ultimately the Committee left interest rates very much on the table, concluding “it would be necessary over coming months to increase Bank Rate in order to return CPI inflation sustainably to the 2% target”.

The BoE now expects inflation to peak at 5% in April 2022. It cautioned that the extent to which higher energy prices fall back over the medium forecast period may have been underestimated. Ultimately, most MPC members have adopted a ‘wait and see’ approach, particularly regarding the labour market’s response to the end of the furlough scheme in September. Extra weight will therefore be given to the labour market report due just before the next MPC meeting on 16th December.

Market expectations are now for base rate to reach 1% by the end of next year, falling from the peak of 1.25% seen prior to the MPC meeting, while the first 0.15% is not quite fully priced in for the December meeting.

Following the BoE’s announcement, sterling fell markedly against both the US dollar and the euro. The pound closed the week at 1.3494 versus the US dollar and 1.1670 against the euro - down 1.35% in each case.

The BoE was not the only central bank to meet last week. The US Federal Reserve announced that it would, as expected, begin tapering its asset purchases by $15bn per month, implying that the asset purchase program would end by the middle of next year. Fed Chair Jerome Powell commented that the bar remains higher for full employment and inflation than for tapering. Inflation, however, does appear to be a growing concern: according to the Fed, it is now “expected to be transitory” rather than simply “transitory”.

Friday’s US jobs numbers concluded last week’s bumper round of data points, coming in better than expected with 531k jobs created in October. The September and August numbers were also revised higher – to 312k (from 194k) and 483k (from 366k) respectively. 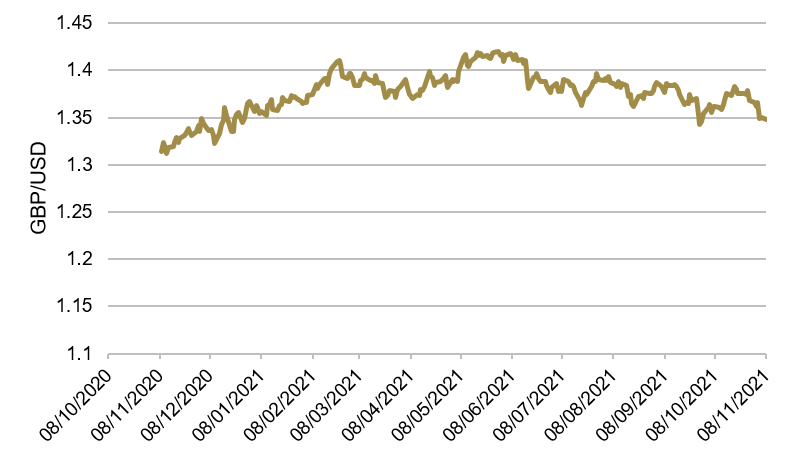 The week ahead is set to be quieter, certainly on the data front, but sterling may still be jumpy following last week’s non-event at the BoE. Indeed, sterling was down 0.2% against the US dollar this morning, opening at 1.3495 versus the US dollar.

Third-quarter growth in the UK is expected to have slowed. Markets expect Gross Domestic Product (GDP) to come in at 1.5% quarter-on-quarter, a large drop from the 5.5% increase seen in Q2. The BoE forecast a 1% increase in GDP for Q4: this would see the UK economy returning to pre-COVID levels in 2022, rather than at the end of this year as was previously forecast.

The other main data point of note this week is Wednesday’s release of US consumer price index figures. The headline measure of inflation is expected to increase to 5.8% from 5.4%, a three-decade high which will further test the Fed’s ideas on ‘transitory’ inflation.

A final point of interest for sterling traders is the continued impasse on the Northern Ireland protocol between the UK and EU. On Friday, the UK government said it would not trigger Article 16 immediately but left open the option of doing so if progress is not made. With tensions running high between France and the UK over fishing, geopolitical events have the potential to move the pound as much as interest rates.