With Bank governor Andrew Bailey setting a seemingly hawkish tone (he said the Bank “will have to act” to curb inflation), markets are fully pricing in a 0.15% hike to bring base rate to 0.25% at the MPC meeting on 4th November; four further 0.25% hikes are expected to bring base rate to 1.25% by the end of next year.

The headline year-on-year measure of inflation fell from 3.2% to 3.1%. This, however, was a technical adjustment for the end of the government’s Eat Out to Help Out scheme and, as noted by Mr Pill, inflation is expected to accelerate from here. Meanwhile UK October Purchasing Managers’ Index (PMI) figures showed an unexpected rise, suggesting a pickup in activity at the start of Q4. Nonetheless, retail sales and consumer confidence fell, reflecting concerns about the cost of living. 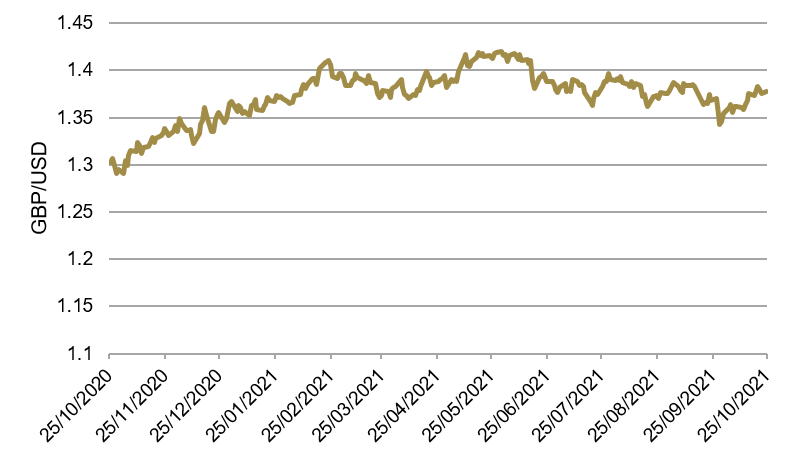 This week’s main event for sterling traders will be the Budget delivered on Wednesday by chancellor of the exchequer Rishi Sunak. Public finances are under heavy scrutiny, but growth is expected to be revised up and borrowing figures have also come in below forecast of late. This is unlikely to be enough to allow the chancellor to throw caution to the wind, and he is expected to remain cautious on tax and spending. The market will be looking for a neutral fiscal budget and balancing that against the need for rate hikes.

Elsewhere, several central banks are due to take action this week, starting with the Bank of Canada on Wednesday. While no movement is expected on rates, markets expect a reduction in the weekly purchase of Canadian government bonds to CAD 1 billion (GBP 590 million) from the current pace of CAD 2 billion. Inflation hit 4.4% (year-on-year) in September, its highest level since February 2003, and markets are now pricing in three rate hikes of 0.25% next year to take the Canadian base rate to 1.0%.

The European Central Bank (ECB) meets on Thursday but is unlikely to announce any changes to current policy. Policymakers have indicated that new staff forecasts will be presented in December, with any policy action held off until then at the soonest.

The ECB will have an eye on Friday’s inflation number, which is expected to increase to 3.7% year-on-year, as well as the first estimate of Q3 GDP. A quarter-on-quarter rise of 2.0% is expected: this would leave the eurozone economy on track to return to its pre-pandemic level in Q4.

In the US, Federal Reserve chair Jerome Powell said on Friday: "I do think it's time to taper; I don't think it's time to raise rates”. Markets are expecting a reduction in the $120 billion monthly asset purchases to be announced at the central bank’s meeting next week. Mr Powell went on to say: “The risks are clearly now to longer and more persistent bottlenecks and, thus, to higher inflation”. For now, the Fed will watch and wait.