As the war in Ukraine escalated, Western nations announced fresh sanctions on Russia in response to President Vladimir Putin’s invasion. The removal of big Russian banks from SWIFT, the international payments network, was the latest in a string of harsh sanctions following the targeting of top-ranking Russian officials, including Putin himself. European, British and Canadian airspace is closed to Russian aircraft and the US is considering a similar move.

Russian state-backed media channels have also been targeted.  Yesterday European Commission president Ursula von der Leyen said: “Russia Today and Sputnik, as well as their subsidiaries, will no longer be able to spread their lies to justify Putin’s war and to sow division in our union. So we are developing tools to ban their toxic and harmful disinformation in Europe.”

The most immediate impact of the sanctions can be seen in the spot rate of the Russian rouble which hit an all-time low of 119 per US dollar this morning (its previous low was 109): this move has prompted the Russian central bank to move its interest rates from 9.5% to 20%. Queues formed across Russia at ATMs over the weekend as Russian citizens became concerned that banks would cease to function or limit cash withdrawals.

In times of crisis, ‘safe-haven’ currencies tend to gain and in this instance the USD has been the main beneficiary: the dollar index, which measures the currency against six peers, has risen by 0.83% to 97.368.

Sterling fell 1.38%, against the dollar to close the week at 1.3405 (its biggest weekly drop in four months) and closed a full cent lower against the euro at 1.1905. However, with sanctions expected to expose European reliance on Russian energy, the euro was also down versus the US dollar, closing 0.42% lower on Friday at 1.1267, and dropping a further 0.70% as trading began in Asia on Monday.

As global equity markets tumbled and energy prices spiked, Russia’s isolation on the world stage is increasingly evident: BP, the biggest foreign investor in Russia, announced it would abandon its stake in Rosneft at a cost of up to $25 billion. 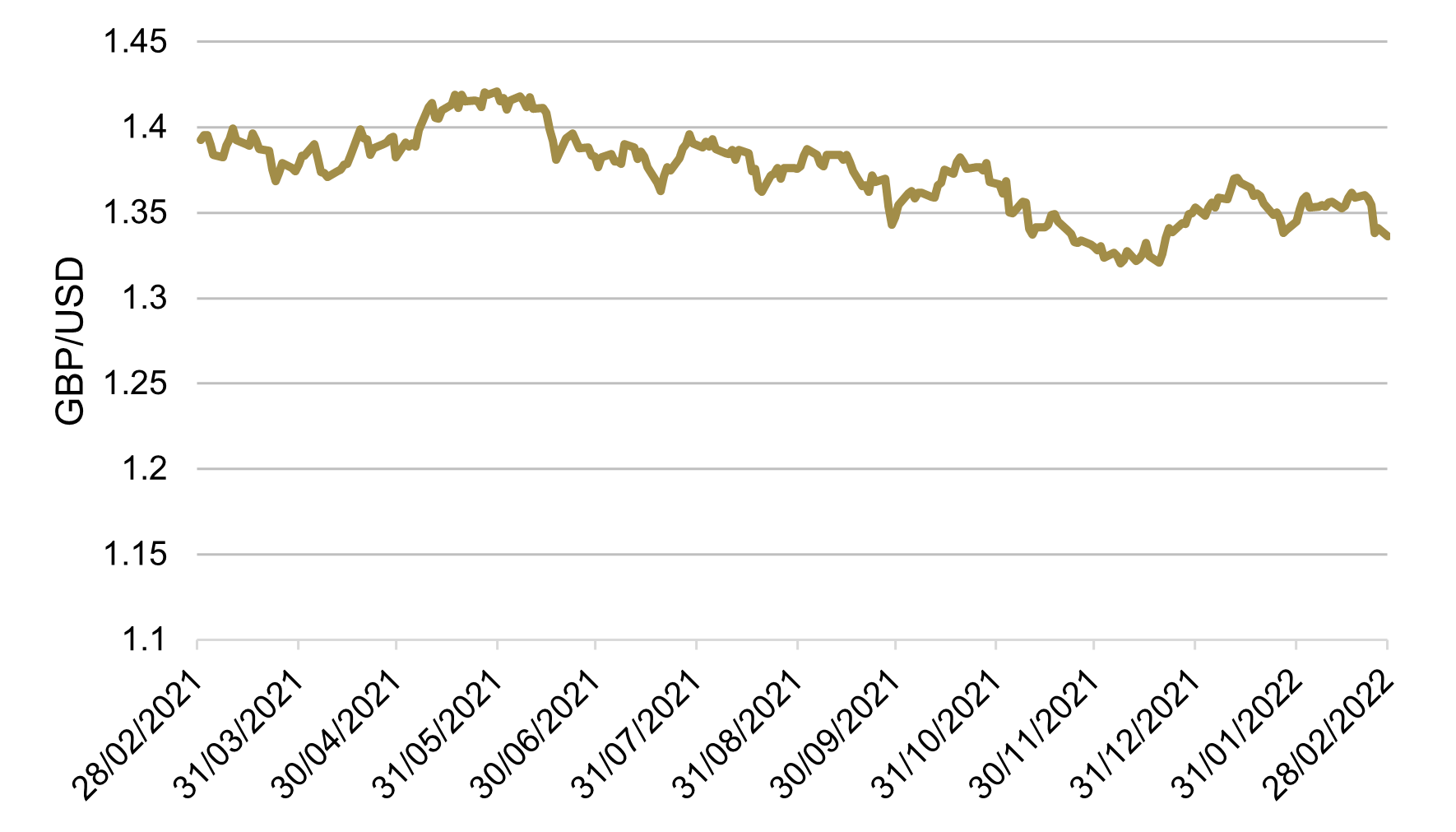 Risks to the global economy from the fallout of war and sanctions have heightened and will perhaps present a further headache for central banks. The spike in energy prices may feed into higher inflation, which would ordinarily increase the need to raise rates.  Policymakers will now have to consider how much of an impact the crisis in Ukraine will have on economic growth.

Various policymakers from the Bank of England (BoE) will speak at events this week, while in the US, Federal Reserve chair Jerome Powell will give his semi-annual monetary policy testimony to the Senate Banking Committee. Both the BoE and Federal Reserve are expected to raise rates by 0.25% at their March meetings. Markets will also be alert to any impact on monetary policy from the developing situation in Ukraine.

In terms of data points to watch, Friday’s US non-farm payrolls report will likely be the highlight of the week. Markets expect to see a further 400,000 jobs created in February and a drop, from 4.0% to 3.9%, in the unemployment rate.

Other data points of note include the Bank of Canada’s policy meeting on Wednesday when it is expected to raise rates by 0.25% to 0.50%. Finally, the eurozone reports inflation on Wednesday and employment figures on Thursday.