On Wednesday, chancellor of the exchequer Rishi Sunak delivered his Spring Statement which, unsurprisingly, focused on tackling the UK’s surging living costs. Mr Sunak began by acknowledging that the war in Ukraine has derailed Britain’s post-pandemic recovery. Among key announcements was a 5-pence-per-litre cut in fuel duty as motorists continue to feel the pain of record prices; the total benefit of this cut is estimated to be worth some £5bn to consumers. The chancellor also raised the National Insurance threshold by £3,000, equalising it with the current income tax threshold of £12,570. He described this as “a £6bn personal tax cut for 30 million people across the United Kingdom.”

UK Consumer price inflation came in at a hotter-than-expected 6.2% in February, fuelling speculation of further base rate-hikes by the Bank of England this year. Interestingly, the uptick was attributed not to increased global energy prices, but rather to ‘core’ household goods such as clothing and furniture. We learnt on Friday that while the volume of retail sales in February fell by 0.3%, the value of those sales grew by 0.7% (i.e. consumers are parting with more cash but receiving fewer goods in return).

Sterling remained relatively flat despite these figures, closing the week at 1.3187 against the US dollar and 1.2006 against the euro. The US dollar retained its safe-haven status, edging upwards against a basket of major currencies three days in a row last week.

Meanwhile, the EU and US have agreed a ground-breaking deal on liquified natural gas. The US will provide an extra 15bn cubic metres of the fuel to the bloc by the end of 2022. It is hoped that this will curb the EU’s heavy reliance on Russian energy (currently Russia supplies about 40% of its total demand). Western economies in general continue to shun Russian oil, though this is proving expensive. Crude prices were driven up further to $120 per barrel on Friday following a missile attack by Yemen Houthi rebels on a major oil distribution facility in Saudi Arabia. 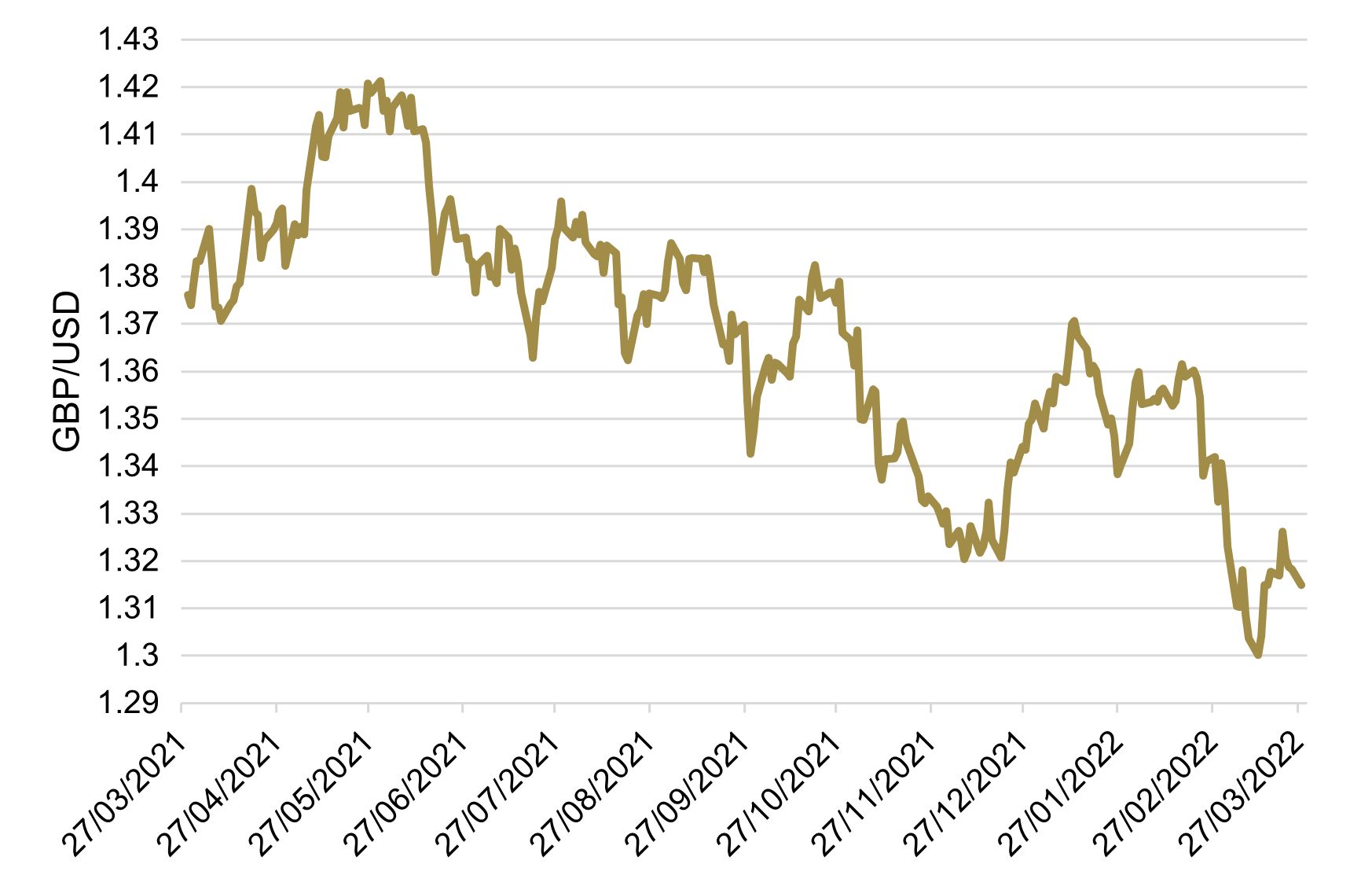 In the US, attention will be focused on the labour market. Economists expect figures for last month to show around 475k jobs created last month and a marginal dip in the unemployment rate to 3.7%. Should this forecast prove accurate, it will strengthen expectations for a second successive rate hike when the Federal Open Market Committee meets in May.

Eurozone data will be headlined by the year-on-year inflation rate, which looks set to surge to 6.5%, up from 5.9% in February. This will not come as a surprise, given the bloc’s large exposure to Russian gas and electricity, as well as to food supplies from both Russia and Ukraine. Estimates of economic sentiment and consumer confidence from within the euro area are also predicted to disappoint; both are expected to fall by around four basis points.

UK data will be light this week; the key reading will be a final estimate of fourth-quarter GDP growth in 2021. Flash figures from the Office for National Statistics had posited a figure of 1%, suggesting Omicron has had a more muted impact on the economy than originally feared.