The Federal Reserve last week raised rates by 0.75%, its single biggest hike since 1994; furthermore, it projected rates above 3% by the end of the year. The US central bank had previously signalled that a 0.50% hike would be necessary in both June and July but opted for a larger hike after a further pickup in inflation was recorded the week before its June meeting. It also suggested a 0.75% hike might be needed in July.

In another central bank surprise, the Swiss National Bank (SNB) raised rates by 0.50%. While this may have surprised markets more than the Fed’s hike (no change at all had been expected), it keeps the SNB policy rate in negative territory at -0.25%. The move observes the recent trend for central banks around the world to announce aggressive rate hikes, citing the growing upside risks to inflation.

The Bank of England (BoE) was swift to follow the Federal Reserve and the SNB into action.  Given larger-than-expected moves in the US and Switzerland, markets had increased bets on the BoE moving more aggressively and hiking by 0.5%. Instead, it opted for a 0.25% hike in line with expectations, its fifth such move in as many meetings, taking the base rate to 1.25%,

The BoE maintains there is still a balance to be struck between upside inflation risks and downside risks to growth. Gross Domestic Product (GDP) fell by 0.3% in April, representing a second successive monthly decline.

The Bank of Japan also met last week, and was something of an outlier, leaving rates unchanged yet again.  That said, in comparison to inflation in other G7 countries, inflation in Japan has been stubbornly low, sitting at 2.4%. The Japanese yen has had a torrid year to date, having fallen some 18% against the US dollar. This is perhaps not surprising given the diverging interest rates in the US and Japan. 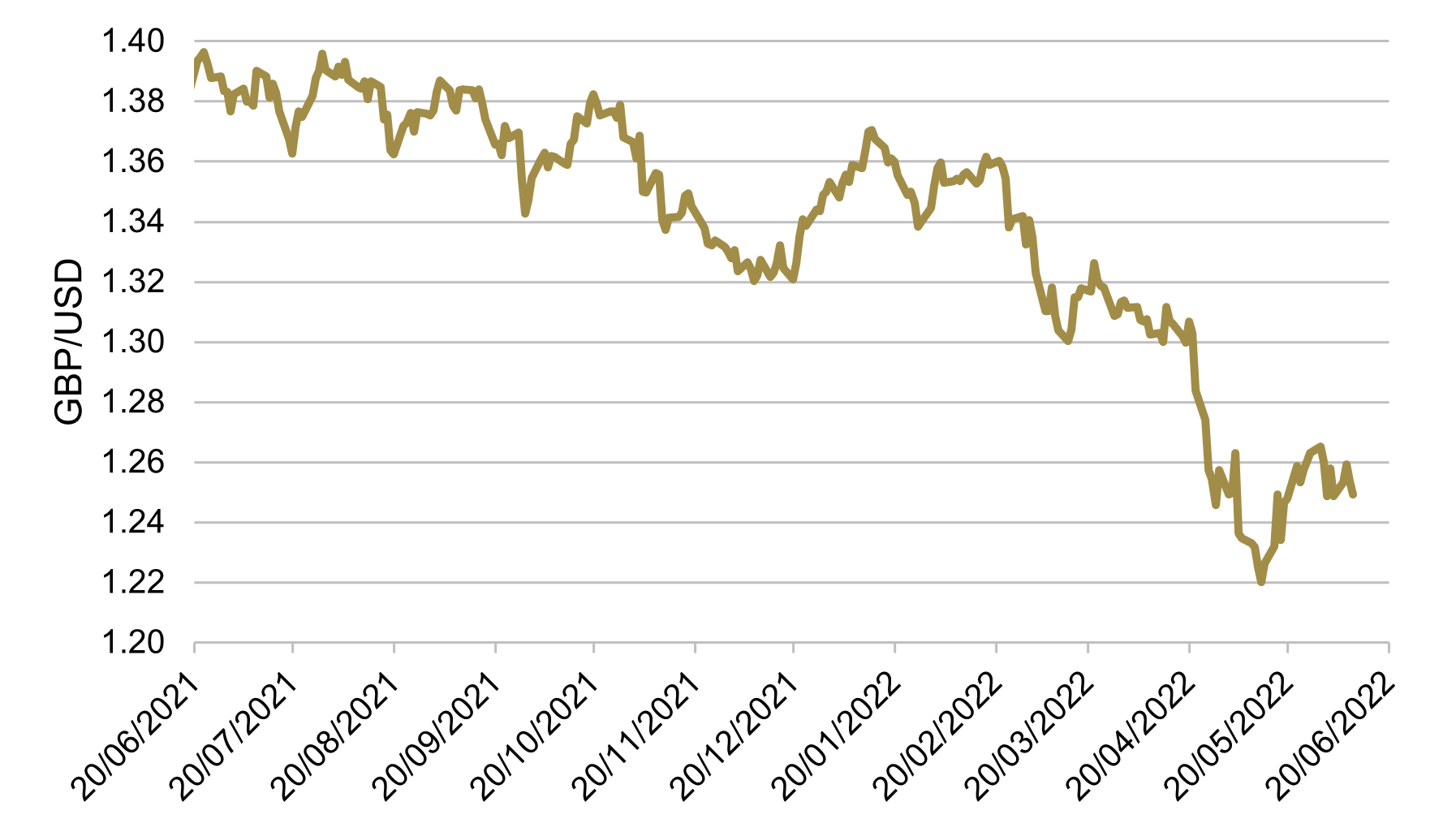 The main UK data point to consider this week is the Consumer Price Index (CPI) Inflation print. The year-on-year measure currently sits at 9%, already the highest in the G7, and markets expect this to pick up to 9.1% in May. The Bank of England now expects inflation to top out at over 11% this year.

The other main data point for sterling traders will be Purchasing Managers’ Index (PMI) data for June; this is expected to show a further softening in activity as uncertainties over high inflation and the war in Ukraine continue to weigh on businesses.

In the US, Fed chair Jerome Powell delivers his semi-annual testimony to congress on Wednesday and Thursday. The three dominant themes are likely to be how high he expects rates to climb, how quickly inflation will fall, and what the impact will be on the economy.

In the Eurozone, focus will be on European Central Bank (ECB) president Christine Lagarde’s testimony to the European parliament. While she will likely reaffirm the need to begin raising rates from July, the same three themes facing Powell will dominate here. Markets will also want to hear Lagarde talk about the new ‘anti-fragmentation tool’ following the ECB’s extraordinary meeting to discuss how to deal with yield spreads widening between EU government bonds.

Markets were particularly volatile last week, with sterling trading in a range between 1.1932 and 1.2406 against the US dollar. Remarkably, given the huge moves and contrasting central bank stances in the UK and the US, the pound ended the week down 0.80% at 1.2224.